We are the foundation of great opportunities for many talented, intelligent, and spiritual people. We established the platform for dialogue, exhibitions, and publications of the creative work of artists, writers, musicians and other interesting people.

“Every person must return to the origins of his being, to self-awareness, to awareness of Mother Earth, to sincerity in relations to himself, to a reverent perception not only of the Divine, but also of surrounding Nature, and other living beings. Then, he will understand what it is to be an Indigenous and share the spirit of Life and become a part of Indigenous culture”. - Paul N. Poloz

Since European man first set foot on the land of America, seismic shifts have taken place in Native American tribes, their cultures, and their people.

On October 12th, 1492, when Christopher Columbus set foot on New World soil, the American Indian Genocide began. According to historian David E. Stannard, the European and white American destruction of the native peoples of the Americas was the most massive act of genocide in the history of the world. Alongside the death toll, the Indigenous arts and cultures were almost erased. (David E. Stannard. “American Holocaust. Oxford Press” 1992).

Together with the Native American people, we would like to declare that any established and ancient culture already constitutes an independent world. This has been the case for thousands of years for the indigenous peoples of America. Despite this, the agenda of the Western European and Euro-American Imperialists has always been to deny Indigenous cultures as cultures, no matter how independent and unique they are. The Western world never understood them, just as it does not understand them even today.

The continual blind superiority of Euro-American Powers supports the idea that all regions, all nations, and all tribes on our planet should develop and evolve to conform to the present Euro-American system – that all other cultures, traditions, and values are in severe disorder and barbarism due to their misunderstanding of Euro-American social and political worldviews and their prosperous way of life.

Perhaps the Euro-American system is good for many Euro-American people.  But didn’t this idea of superiority and domination emerge out of brutal European colonialism, a latent misunderstanding of the essence of the rest of the world, and an irrational unwillingness to agree with anything that contradicts the idolized Euro-American system? Moreover, is it not visible how the technological changes that grew out of this idea have swept the modern world, making our changing world even more fragile, more vulnerable and lost? Most likely very soon, the diversity of the human world, the variety of traditions, cultures, religions, and philosophies will become degraded, devalued, and erased from the memory of the new generation.

Today, the frontline of Euro-American technological civilization is on the door’s threshold of Indigenous cultures. This has caused Indigenous tribes to face very serious problems and challenges, and Indian elders are asking serious questions:

What do we have to do to protect our tribes when the new mass culture is addicting and poisoning the minds of our young generation and purposefully making them disoriented and confused? The purpose of this new culture has been to disvalue spiritual culture, traditions, history, and the religion of our ancestors.

How can we protect ourselves and the new generation from mind-manipulating technologies that are set for the deliberate dehumanization of human beings into “things”?

A new invisible war is going on against the traditions and beliefs of our ancestors, pitting technology against nature, the spiritual cultures, and knowledge of ancient rituals and traditions. Isn’t this a new way to “Kill the Indian, save the man?”

Can tribal spiritual cultures, religions, traditions, and rituals survive? Can they even come back?

A difficult task lies ahead for the movement of Indian activists and the leaders who practice and protect Indigenous ancestral rituals and spiritual traditions.

Twelve years ago, the magazine “Indian Country Today” published the architectural proposal of the Monument-Museum of American Indigenous Cultures represented by architect-artist Paul N. Poloz. Since then, many years have been spent researching, consulting, developing and improving this project. Today, the ARCPROSPECT International Foundation is showing this proposal to Native American communities once again with a new perspective and with an aim to unite the most talented and creative people from all tribes to raise Indigenous cultures to a higher level.

Approximately 230,000 -square-feet, the Monument-Museum has been designed in the Indigenous style with the aim to be as beautiful and natural as the cultures of the Indigenous people.

The idea behind the concept of the Monument Museum is a combination of two paradoxical expositions: 1) the spiritual culture and art of Native Americans through the eyes of artists, writers, poets, spiritual leaders, etc. and 2) the harsh nearly 500 year history of European colonization and occupation which led to the one of the worst genocides and cultural destruction in human history.

The presentation of these paradoxical themes is the great task and goal that we at our foundation have undertaken. In terms of architectural performance, the architect sought to raise these banned and belittled expositions to a whole new level.

The museum will begin with a celebration of the spiritual culture and art of Native Americans.
Our vision of the Monument-Museum is to express the spiritual world of Indigenous peoples, which will honor and privilege Native voices, perspectives, values and understanding. And while most museums of Native culture hone a colonial mindset that is always focused on stagnant intellectual knowledge that includes exhibits, artifacts, and archaeological, historical, and political documents and information, our vision stands against this. We have no intentions for the exhibition of any stolen sacred objects, or the exhibition of the collection and repository of indigenous bones. This is blasphemy. We believe that those objects are not things, but rather are sacred objects that were dedicated by the ancestors for worship and ceremonies.  And those bones are not archeological objects; they are Indian relatives.

THE INTERIOR OF MUSEUM 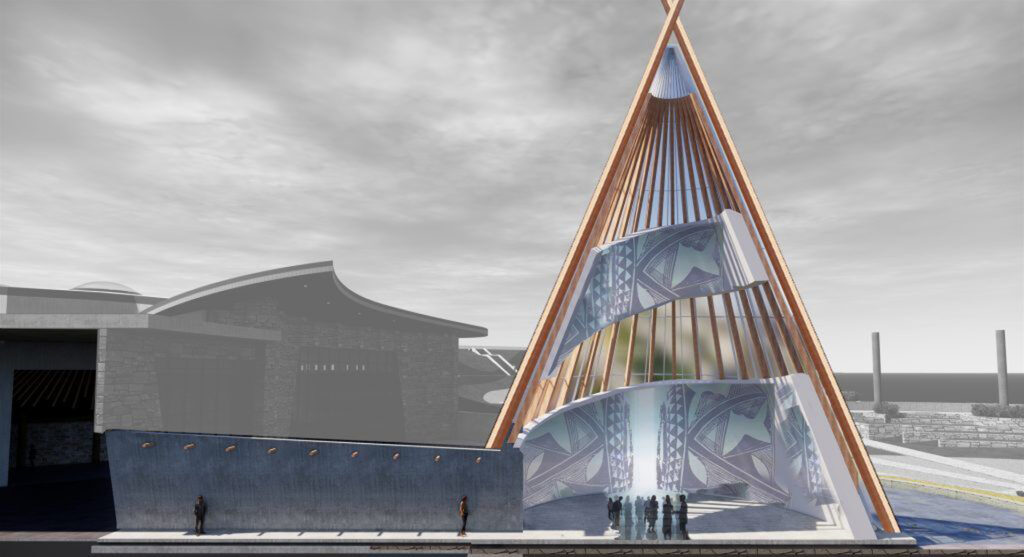 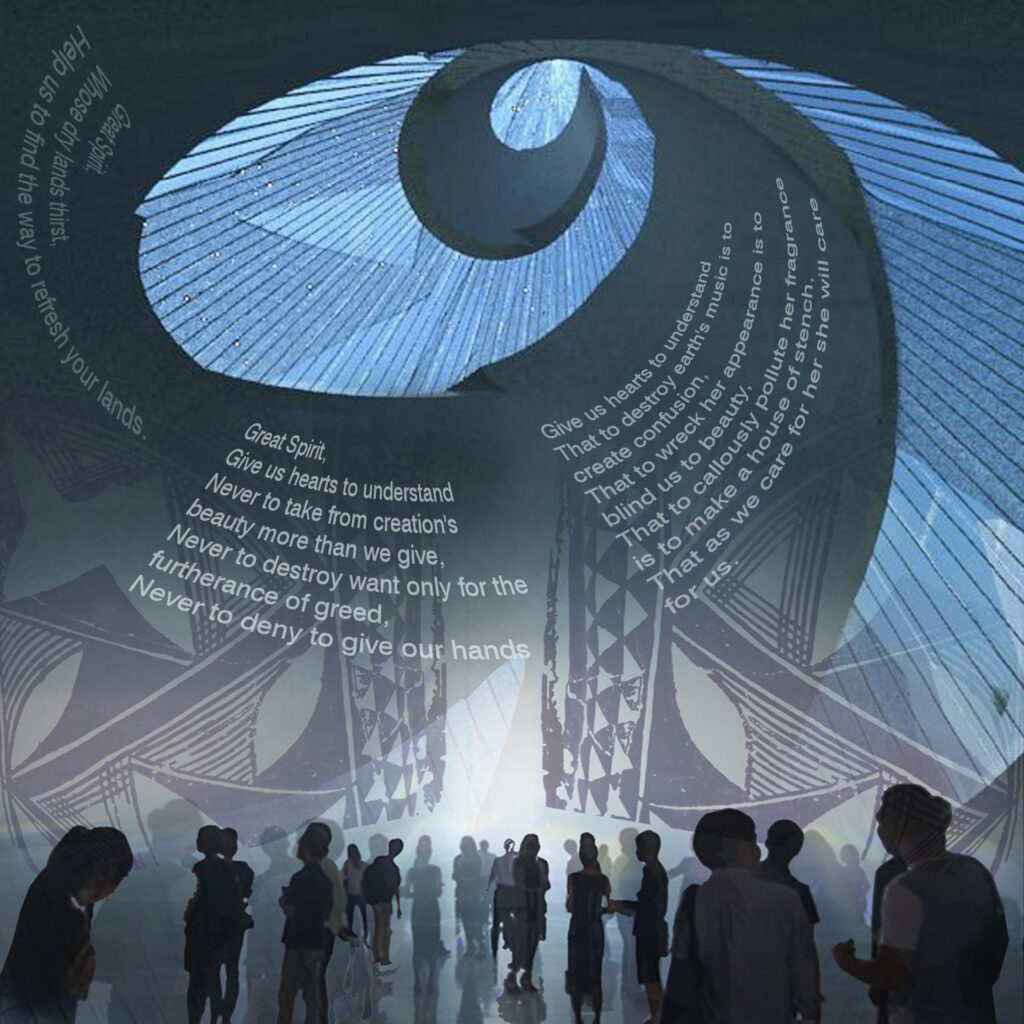 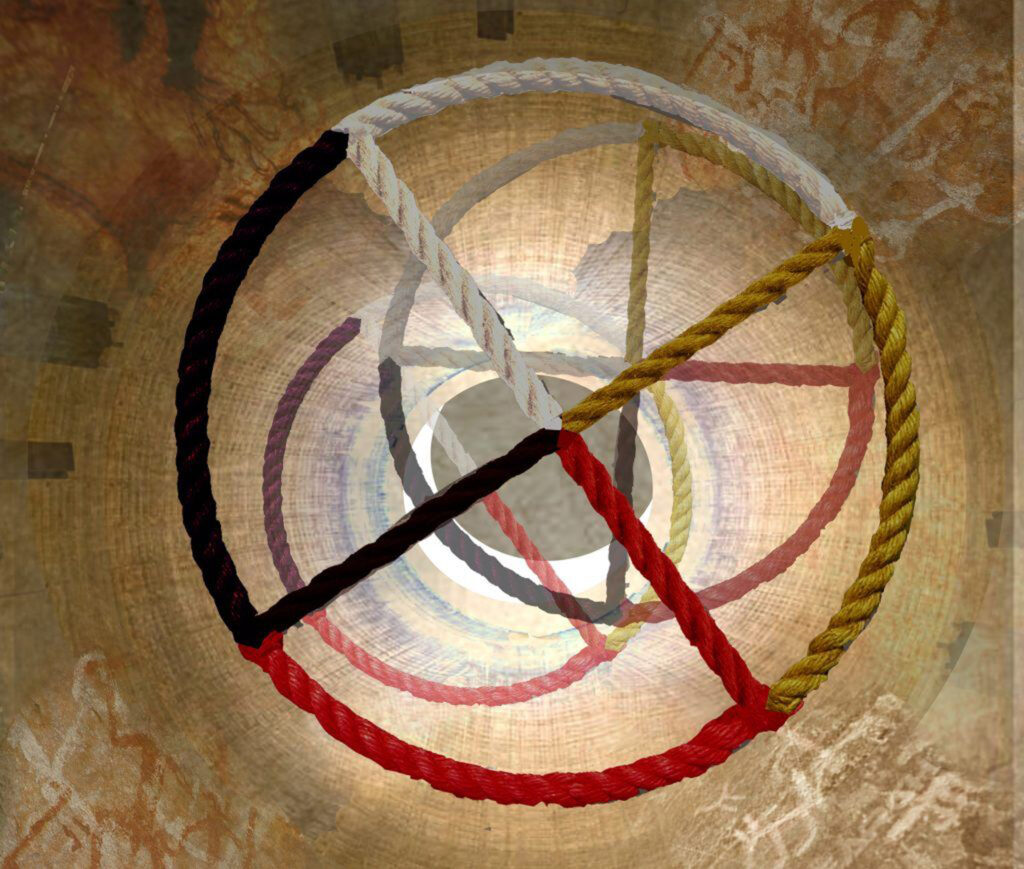 THE DESIGN OF THE MONUMENT OF GENOCIDE

In the final conclusion the architect created the mound with a rising cascade. He borrowed this vision from the Cahokia mounds in Southern Illinois.  The walkway leads visitors to a sculptural monument dedicated to the Indigenous ancestors and to a powerful panoramic view of the Grand Canyon.

The disappearance of the inhabitants of the big city Cahokia (which was once the size of 13th century London) is a big mystery to modern archaeologists. What happened on these mounds and why they were built is unknown. We only know that there was suffering and violence. People were buried there in mass graves – hundreds of people, mostly young women. We do not know who did this. The evidence could have been destroyed by those people who do not want that evidence to be discovered.

This Cahokia mound led the architect to the idea of ​​incorporating a mound as a symbol of the terrible and prolonged genocide against the American indigenous population with erased evidence. This symbol will serve as a great memorial to those millions of Indigenous people who vanished. The Museum mound also has an inner part which is dedicated to this historical tragedy and represents death and the resurrection of life. 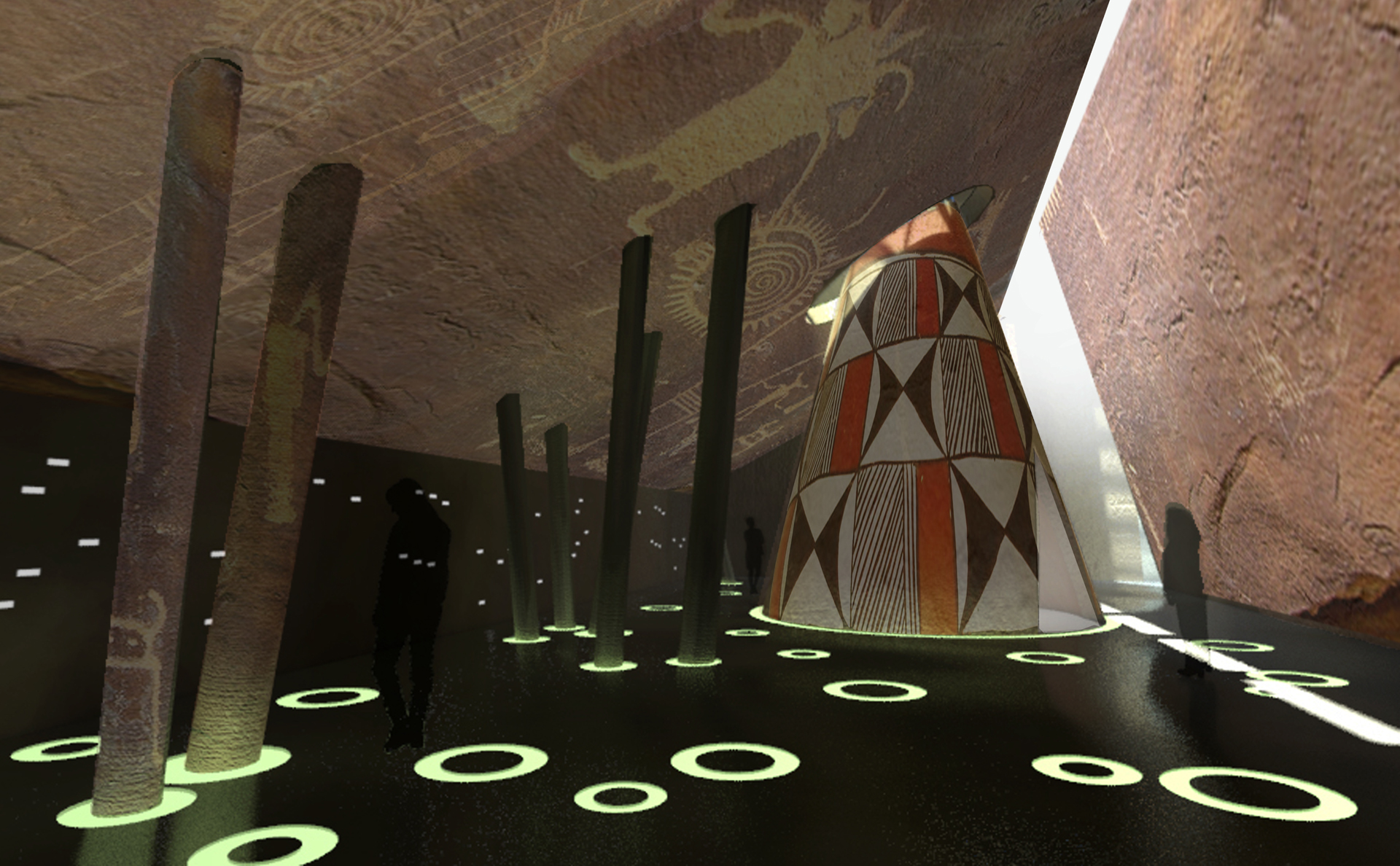 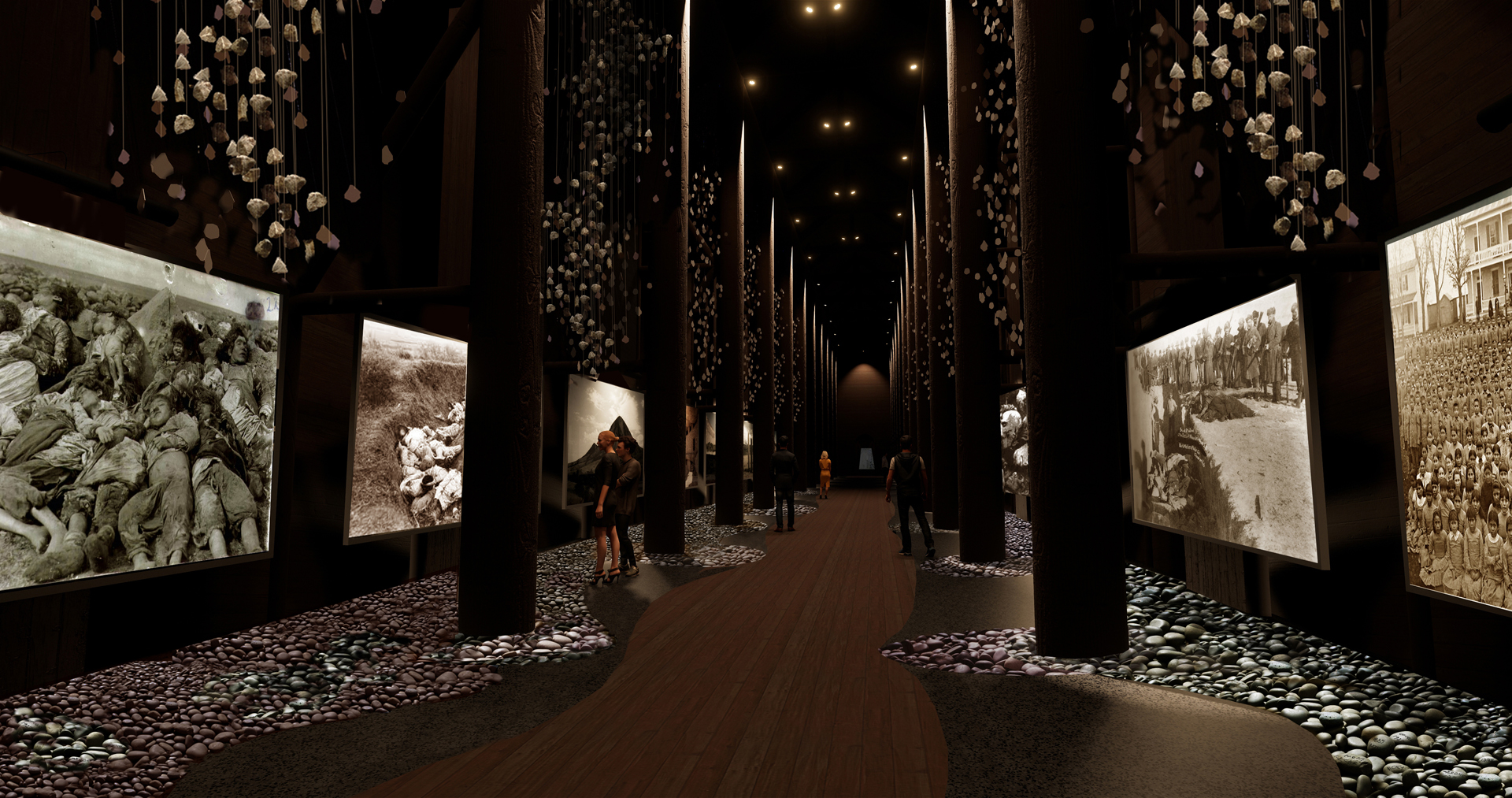 Paul N. Poloz,  a native Belarusian and Komi, bears the genetic memory of suffering in his own heritage. Every third person living on his ancestral land was terminated by the Nazi regime for their national identity or differing worldviews. Paul still bears this ancestral memory of this terrifying invasion by Western European fascism whose leaders aimed to colonize his land and enslave his people.

Paul N. Poloz – the director of the project concept and  the architectural design.

Carlo Hawk Walker – an Elder of the Western Cherokee Nation